What 631 Cities Tell Us About the Future?

When Bloomberg, earlier this year, challenged mayors from around the world to put forward their best ideas for bouncing back from the pandemic, the response was overwhelming: 631 cities from 99 countries submitted ideas and projects.

Before we announce the top 50, it’s worth reflecting on the stunning diversity of ideas and approaches in those 631 applications, half of which came from cities in developing and emerging nations. Viewed as a whole, these entries represent the world’s clearest picture of city priorities emerging from the Covid-19 pandemic — where cities are in terms of their continuing response and recovery, where they want to go, and how they hope to get there. They’re a global action plan for assuring that we don’t flatten the curve on urban innovation when the crisis fades.

In terms of the issues cities are addressing, it should come as no surprise that Health and Well-Being rose to the top. More than half the cities (337) put forward ideas in this area. A close second was Economic Recovery and Inclusive Growth (327), followed by Equality and Good Governance (226) and Climate and Environment (163). At a more granular level, specific problems cities seek to address include mental health (57 applications), unemployment (38), waste (34), food security (32), public space (26), education (24) and the digital divide (23).

Important trends also emerged by geography. For example, in Africa, where urban populations are projected to grow faster than anywhere else in the world, one-third of the applications relate to shoring up basic infrastructure. By contrast, in Europe and North America, social inclusion is the predominant theme. That’s especially true in the U.S., where cities are reckoning with a legacy of racial injustice: 62% of U.S. applications address different facets of this problem, such as building Black wealth. By contrast, in our last Mayors Challenge, in 2018, only 4% of U.S. applicant cities sought to address racial injustice. 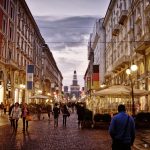 The four roads for the Milan of the FutureNon categorizzato