Smart Cities of the Future

The restrictive measures implemented to stem the spread of the pandemic have given new value to neighborhood life in the cities: proximity shopping, the rediscovery of shops, and the use of means of transport only for long journeys are just some of the spearheads of local living.

A rediscovered way of experiencing places that will undoubtedly influence the design of the “Cities of the future”: the concept of spatial proximity and temporal proximity intertwine at the center of the reflection of designers and urban planners.

We saw it before with the Ville du quart d’heure by Anne Hidalgo, the mayor of Paris who imagined a Ville Lumière measuring fifteen minutes. According to the urban transformation conceived by Carlos Moreno, professor at Sorbonne and mastermind of the project, the city of 15 minutes requires minimal movements between housing, offices, restaurants, parks, hospitals, and cultural places to guarantee six social functions in each neighborhood: living, working, eat, take care of yourself, learn and have fun.

Also, Genoa is re-planning the urban fabric according to a model called the city of 2 km: the restyling program promoted by Simonetta Cenci, Councilor for Urban Planning and Redevelopment Projects, started with the recovery of the Silos Granario Hennebique, which it will have commercial and cultural destinations, to bring the heart of territorial regeneration first of all to the historic center, between the incentive for sustainable mobility and the defense of the shops, bulwark of a millenary culinary and artisan tradition.

Across the border, while some large metropolises are emptying, like New York, others think deeply about the principles of proximity and relationship. This is the case, for example, of Melbourne, the capital of the Australian state of Victoria, that launched the twenty minutes neighborhood plan, committing itself to guarantee citizens the possibility of satisfying most of their daily needs with a simple walk around the extended surroundings of their home.

As Davide Agazzi explains to Forbes: “a city-district model certainly has elements of interest, but it risks making people live in a bubble and eventually becoming exclusionary”.

Where in the end, the citizens complain because there is nothing new to do. Total boredom or unconditional love?

We will talk about this and much more at Mipim Cannes, do not miss it! 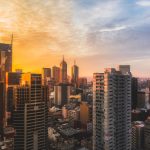 The City of the Quarter of an HourMipim, Real Estate